It’s February 2014 and Microsoft has a new CEO. His name is Satya Nadella.

The company is struggling. Engineers are leaving for Google. Product launches over the past decade have failed due to an obsession with Windows & Office. Bing is dying. The pundits can smell blood.

But in just a few months, Microsoft’s share price has tripled. 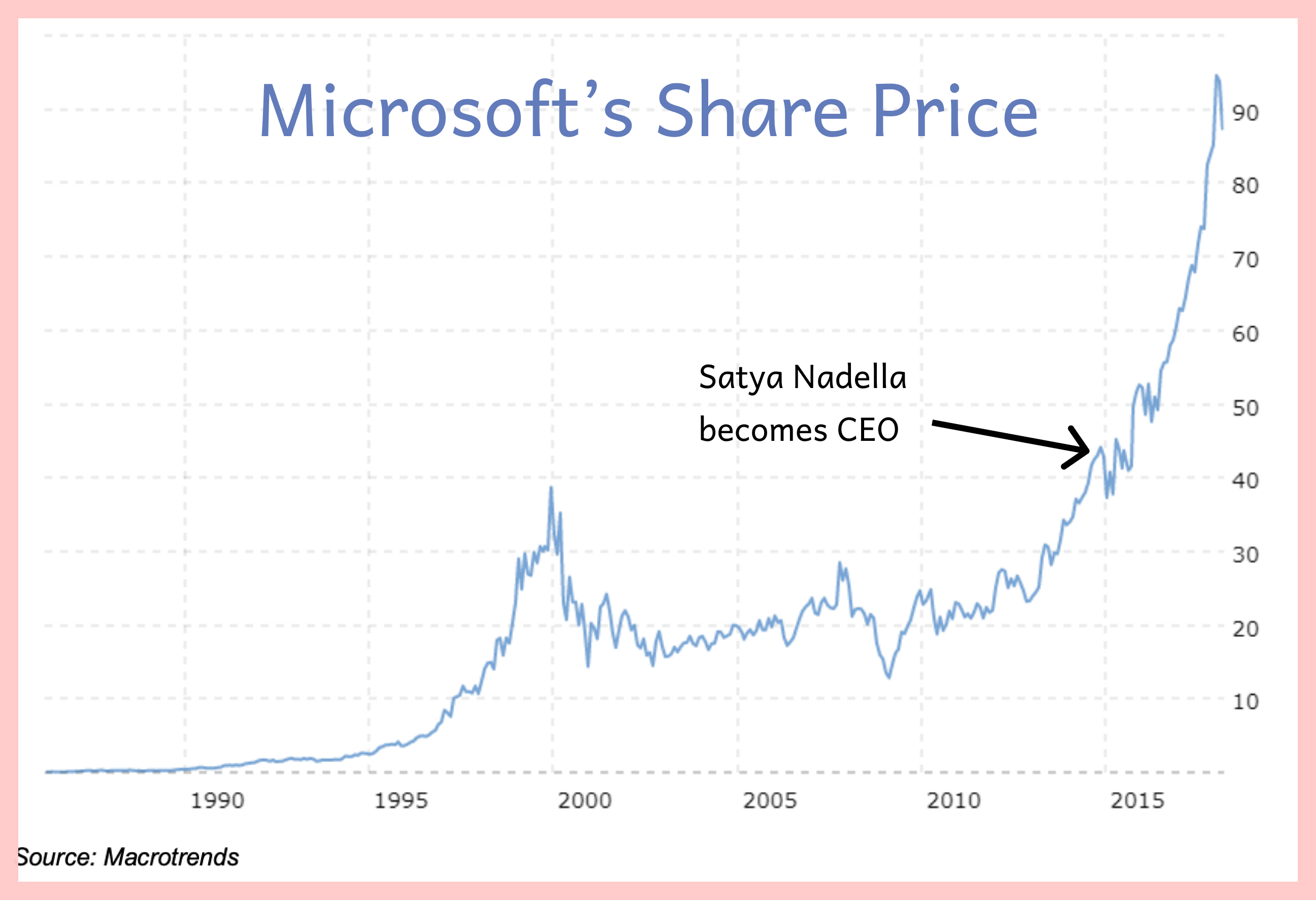 The company’s outpaced the likes of Airbnb and Netflix.

Nadella had a repair job on his hands. Having joined Microsoft in 1992, he had climbed the ladder. And now it was time to rebuild it. Brick by brick.

So that’s what he did. He rolled up his sleeves and focused on Microsoft’s most important asset.

It started with a simple change. Nadella modified Microsoft’s vision statement from:

Put "a computer on every desk and in every home."

“empower every person and every organization on the planet to achieve more.”

Rather than focusing on computers, Nadella and Microsoft were about to put their energy towards the humans behind the technology.

As he mentioned in an interview:

“Our company’s identity is fundamentally about creating technology so that others can create more technology. And it’s essential that it is being used for empowering more people.”

But you can’t empower others around the globe if your own employees..err, are being screwed.

And that’s exactly what was happening.

I got Cs in college. And it wasn’t like I didn’t study.

All because I was being graded on a fucking curve. And that curve ensured a set number of people would always suffer each time.

My college experience, believe it or not, is what was happening at Microsoft. Their infamous stack-ranking system meant that employees were pitted against each other every 6 months.

And so instead of focusing on creating the best possible product, engineers would hide information from each other. They’d fear giving away their ideas because it could damage their positions.

Take the 5 best engineers in the world. Under this system, one of them would be fired. 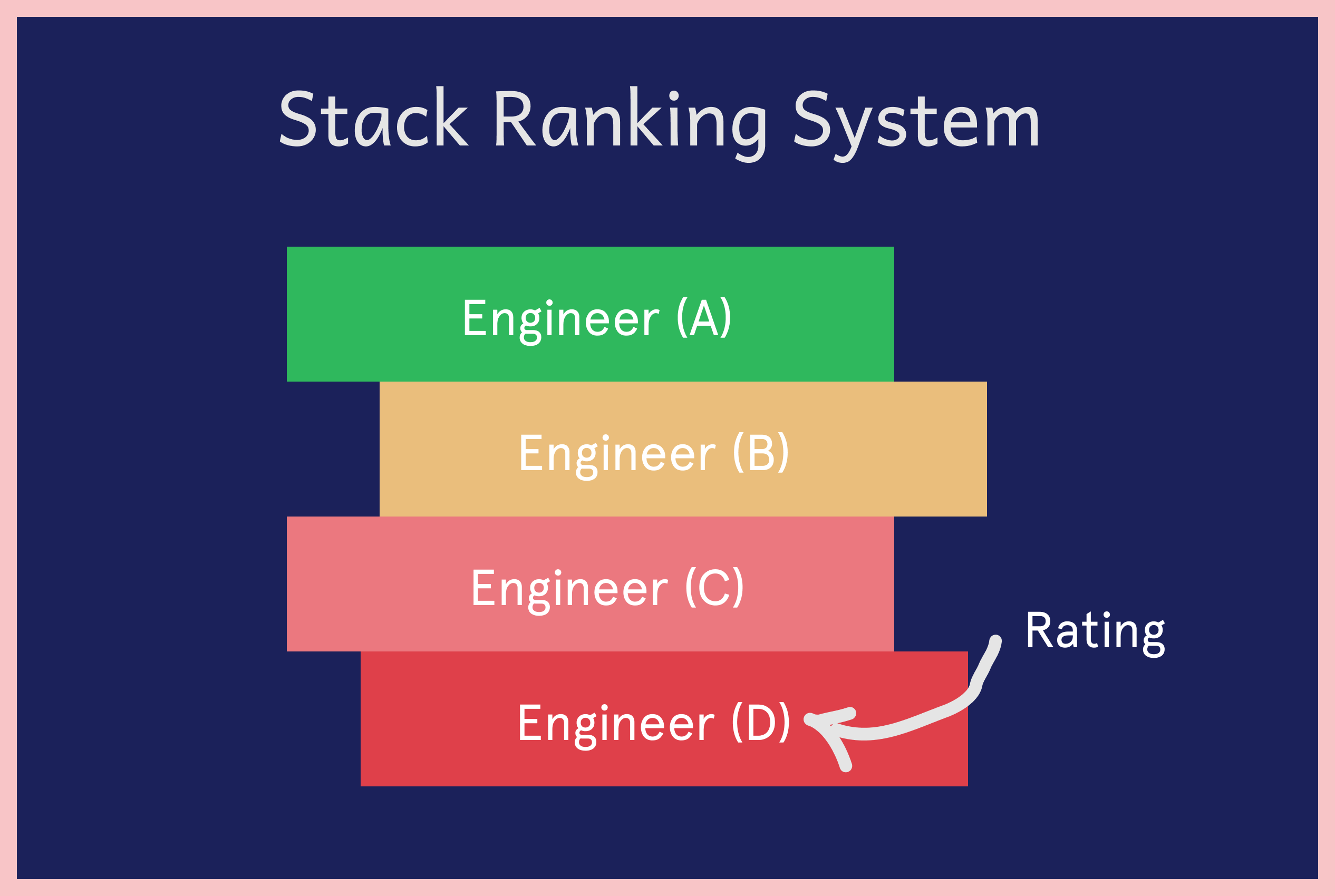 This management style stemmed from the Balmer era which centered on finding holes in other people’s ideas. Employees wanted to show they were the smartest. At the cost of innovation. And innovation is everything.

So Nadella got rid of the ranking system.

Instead, Microsoft was going to give much more proactive and consistent feedback. Bonuses, too, were going to be much more at the discretion of managers instead of an algorithmic employee rating system.

Putting it into practice

Not everyone can walk the talk. But Nadella translated big words into actionable steps.

Here are some cultural values Nadella outlined along with their practical implementation:

Bin the stack ranking system. Make employees collaborate, not compete. This encouraged spread of ideas amongst the company and allowed Microsoft to innovate faster.

ii) “Learn It Alls” instead of “Know It Alls”

Instead of a weekly 4 hour meeting where the management would speak to the employees, management implemented a weekly hackathon where they could engage with and test out employee ideas.

Judson Althoff, one of Microsoft’s Executive VPs, explains how his compensation package weighs his sales goal and his diversity goal equally. Althoff has skin in the game when it comes to diversifying Microsoft’s candidate pool.

This sense of curiosity and humbleness that had been bulldozered out by Balmer’s aggressive style was another trait that Nadella wanted to bring back.

One of the ways Microsoft puts this into practice is by bringing in customers they lost. They use failure as the starting point to see what they could have done better.

I want to highlight the work that Nadella has done with author Carol Dweck, who popularized and wrote about the Growth Mindset.

Dweck’s book separates the world into learners and non-learners. The learners are able to cultivate qualities through work and effort. And the non-learners don’t even try. They think everything is fixed.

Nadella wanted Microsoft’s culture to be based on this growth mindset:

“And to me, that model of culture is not a static thing. It is about a dynamic learning culture. In fact, the phrase we use to describe our emerging culture is “growth mindset”, because it’s about every individual, every one of us having that attitude - that mindset - of being able to overcome any challenge.” - Satya Nadella

This wasn’t all just a load of fluff. One small example of Nadella implementing a dynamic learning culture was moving the firm from an annual budgeting process to a rolling set of forecasts.

Things don’t always go to plan. And Nadella saw that there’s value in learning from mistakes, adjusting, and then heading off in the best possible direction.

Satya Nadella holds a 98% approval rating on Glassdoor. People are excited about the prospect of working for Microsoft.

Perhaps the most impressive part of this is that Nadella wasn’t handed a blank slate. He didn’t have the luxury of moulding the organization into whatever he wanted from scratch.

He had to tackle the cultural debt that had built up, throw away rigid assumptions that his predecessors had held, and envision a new future for his beloved organization.

Satya Nadella turned shit into sugar. And now we’re all just waiting to see what he does next.

Thanks for reading. There’s great information available on this topic out there and I used this case study from Herminia Ibarra, Aneeta Rattan, and Anna Johnston to help me learn more about Nadella & Microsoft.

I’d love for you to subscribe to my newsletter. Each week I spend 20 hours analyzing a tech career topic that’s going to help you level up.

This is the content I wished I had when I graduated. Instead, I got tips on fixing my resume.