The Toastmasters Guide To Effective Feedback

I noticed the level of detail with which they approach giving feedback. Toastmasters recognizes that giving better feedback is key to helping others improve and learn from their mistakes.

Think about it. If you fail to properly articulate the why behind someone’s subpar performance, they’ll likely just ignore your comments because they’re not actionable.

On the other hand, if you’re a bit too blunt, you risk offending someone. And ironically this leads to most people not doing anything because instead of focusing on what you told them to improve, they’ll go into defense mode.

I’m convinced that the Toastmasters Feedback Guide can be applied to our day to day at work.

Whether you work in tech or lead expeditions to Kilimanjaro, I’ve distilled down my key learnings from reading Toastmasters’s guide that will help you give more effective feedback.

And you won’t be labelled as the “bad guy” just because you’re actually pointing out what someone can improve. Instead, you’ll be recognized as someone people can go to when they want honest feedback. Even more importantly, people will come away from these interactions refreshed because they’ll have practical takeaways.

Let’s get into it. Here are 6 actionable tips that you can use to give feedback that doesn’t suck.

Before you give effective, actionable feedback, you actually need something to measure it against. These performance expectations and goals then need to be clearly communicated to others around you.

The new intern at work is not going to have the same level of expectation as your veteran data scientist. That doesn’t mean the intern can do crap work - it just means that what you expect from both individuals is going to naturally vary.

Right from the Toastmasters guide:

The passage of time diminishes the effectiveness of your praise or criticism.

If the feedback you give is too late, then your co-workers won’t be able to act on it, because they’ll have forgotten what they did. There’s a reason why back in High School your teacher would give you feedback on an essay before you wrote the next one. It sounds simple, but in a fast moving workplace it can often be forgotten.

If the feedback you give is too general or broad, your message is going to be hard to interpret. And when what you’re saying can’t be distilled down into something specific, it’s going to be ignored.

Here’s an example. Instead of saying: 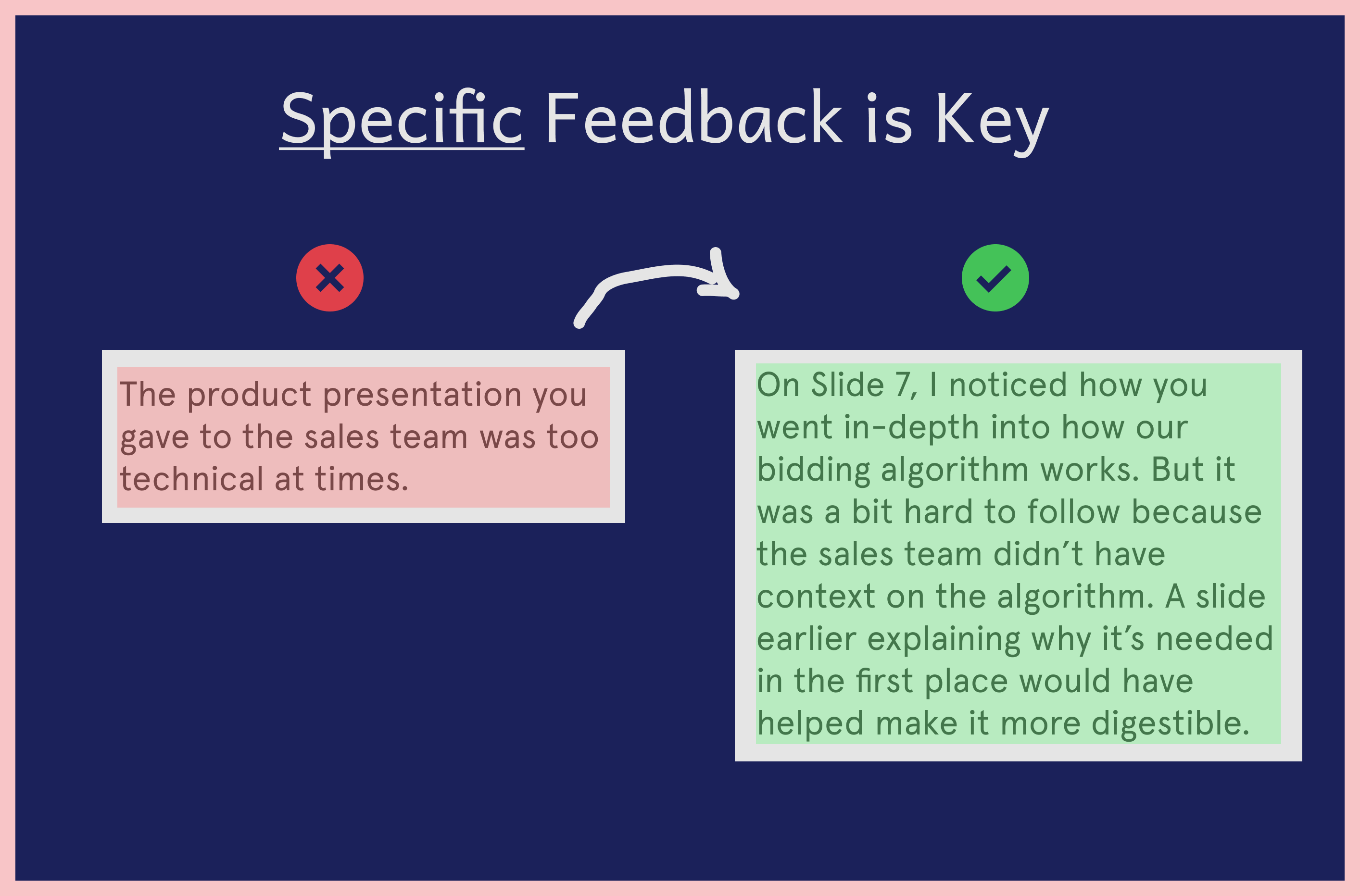 “The product presentation you gave to the sales team was too technical at times.”

“On Slide 7, I noticed how you went in-depth into how our bidding algorithm works. But it was a bit hard to follow because the sales team didn’t have context on the algorithm. A slide earlier explaining why it’s needed in the first place would have helped make it more digestible.”

Avoid using “You” too much when giving feedback. It’s one of the main reasons why someone might get a bit defensive.

Remember: this is feedback coming from your perspective. It’s not some kind of label you’re trying to stick on someone. 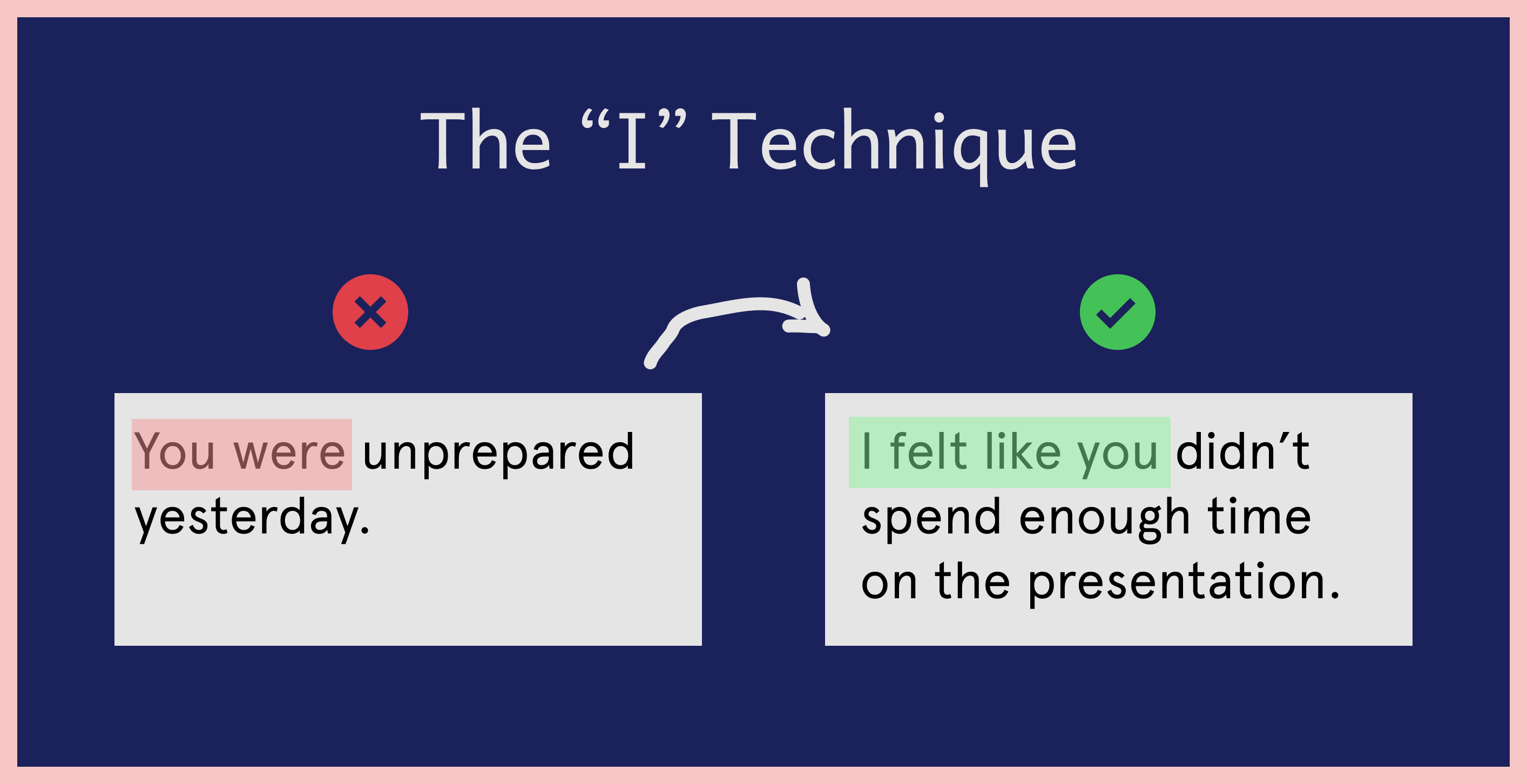 Say, "I felt like you didn’t spend enough time crafting next steps to follow up the presentation we gave yesterday" rather than "You were unprepared yesterday"

5/ Start and End in a positive manner

A good rule is to start off with something positive. This disarms the person and allows them to ease into the conversation.

Once they’ve settled down, you can share more constructive criticism. Studies have shown that the ideal praise-to-criticism ratio is 5:1. Meaning, for every negative comment you make, you need to share five positive comments as well. Five might seem like a big number, but I’ll get to this in a bit.

Finally, try to end on a positive note too. Give them a roadmap to aim for and express your confidence in them.

6/ Feedback is a continuous process

Some of you might have gotten scared when I stated that the ideal praise-to-criticism ratio is 5:1. Five seems like a big number. 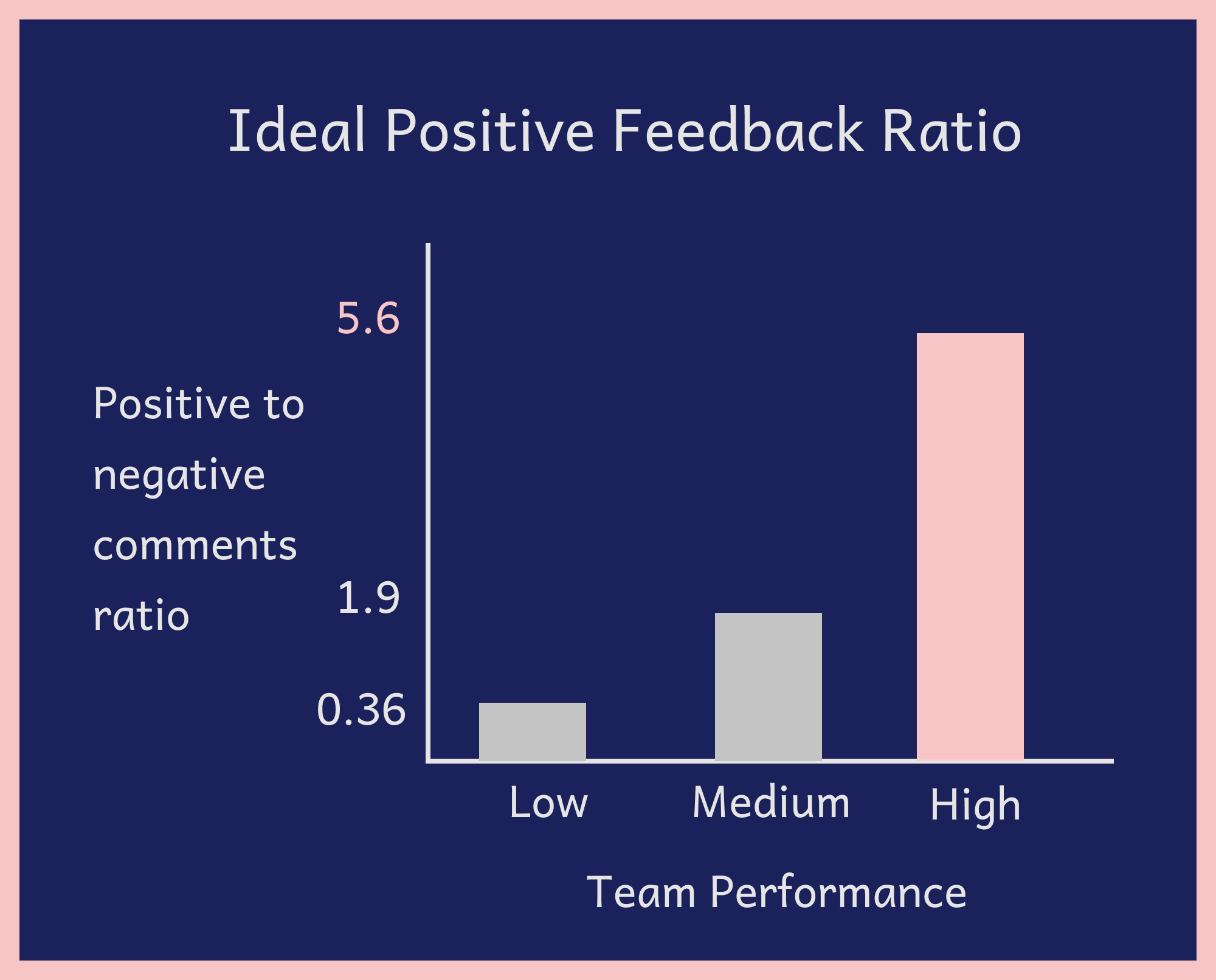 But if you’ve put yourself in a situation in which you’re just stacking negative comments on top of negative comments, there’s likely a huge communication gap that has led to the low level of performance. Perhaps a project or presentation aim wasn’t clearly communicated.

Or more likely, you’ve just waited too long to give feedback. If the only time you give someone feedback is during their quarterly performance review, then they’re going to be surprised. They won’t know where they stand and will blame you for not being more transparent with them sooner.

And that’s the last tip - make it regular. Giving someone feedback shouldn’t be some type of formal, ceremonious event. It should be frequent and simple.

That’s it folks. I hope that was useful.

The Toastmasters manual on effective feedback can be found and downloaded here.