The Blackberry Guide To Ruining Your Career

John Chen, Blackberry CEO, wrote these words in an open letter to all Blackberry users in 2014. The company was in a downward spiral, losing market share to the likes of Apple and Samsung. Yet Chen saw no reason to press the panic button.

His open letter stresses the importance of staying true to yourself. It remarks that words like “innovation” are often carelessly used.

Fast forward 2 years. Blackberry has a market share of 0% and $1 billion in losses. 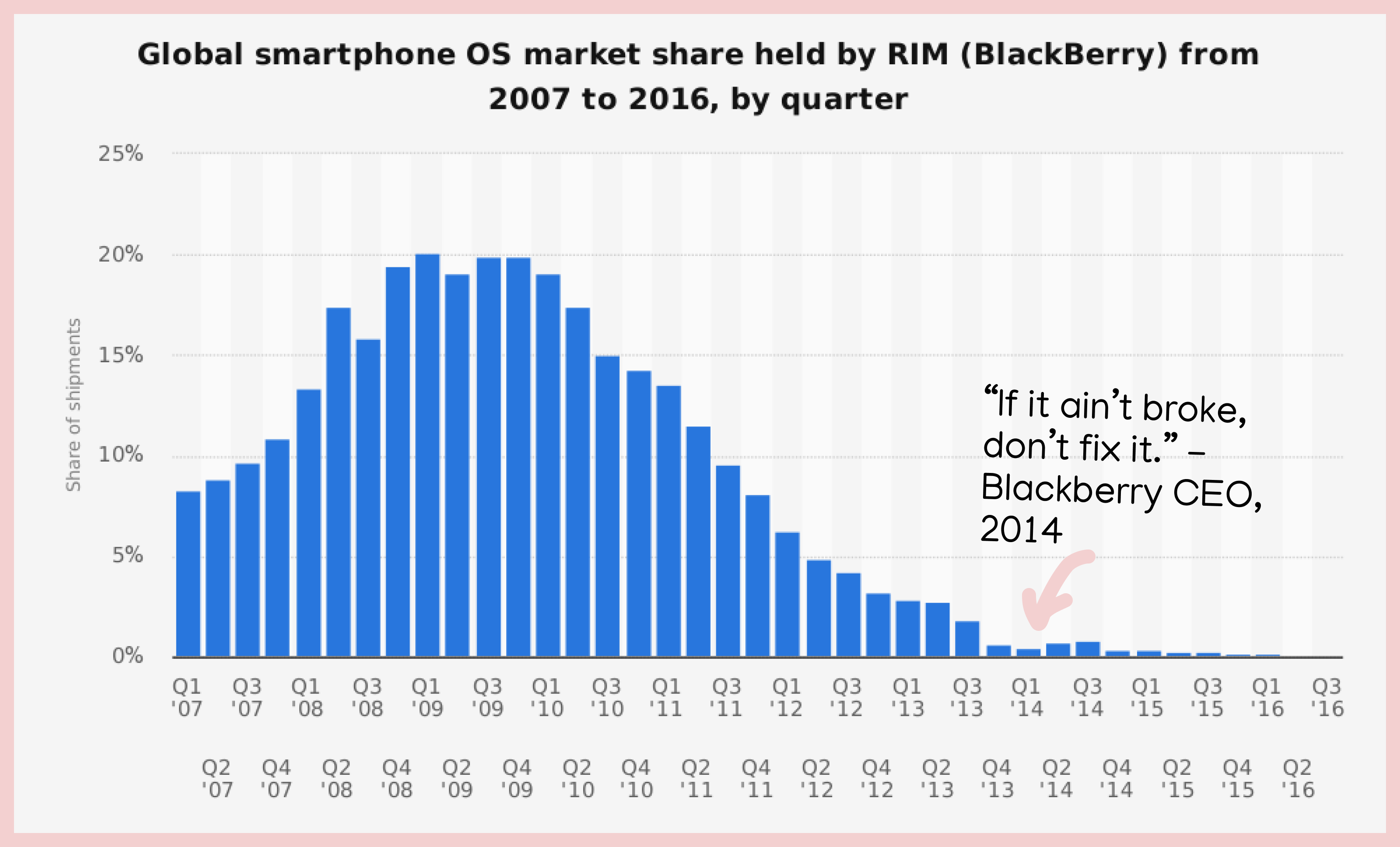 The tale of Blackberry is a cautionary one. It was once the Apple of today with over 50% of Smartphone Market Share and 85 million users.

But it was also stubborn. Blackberry’s success in the early 2000s led to its death in 2016.

It focused so much on what had worked, like Blackberry Messenger (BBM), that it stopped exploring new opportunities. And once the company started faltering, it thought BBM would be the lifeboat. It wasn’t. Whatsapp motored ahead.

Blackberry exploited its way to success by doubling down on what was working. But when it came time to explore, the company faded into irrelevance.

Doubling down works. Until it doesn’t.

Let’s say you’re deciding where to go eat. You can either pick a tried and tested restaurant or discover a new one. The regular option is pretty good, but what if there’s another you’ll prefer?

Making these types of decisions is hard. There’s a tradeoff between some guaranteed level of satisfaction and an unknown. Blackberry refused to try a new restaurant.

A similar tradeoff applies to your career. When do you pursue a new opportunity?

A common strategy is to do a lot of exploring at the beginning of your career and then stick to what you enjoy. This makes sense.

But here’s what I’ve noticed. Even when someone finds work they enjoy, they’re still doing plenty of exploring. It just happens within the same domain or position.

Once you stop exploring, you lose.

You might think this aligns with the Blackberry strategy of committing to one thing and not exploring.

But that would be wrong, because if you look under the hood, you’ll notice that Doug was still exploring. He was just doing it in the same domain. Here’s an example:

In 2003, Google published a paper on the MapReduce algorithm. This algorithm was especially useful to the work Doug was doing at the time on Apache Lucene and meant the project could grow much faster.

But 2 years later, Doug realized that the Apache Lucene project would need more engineering resources to scale. It had become too ambitious for just him to handle. So instead of sticking to the project, he went to work at Yahoo and leveraged their expertise to make progress on the same engineering problem.

This led to a new project called Apache Hadoop, which was a big success. All because Doug explored new ways to make his original goal possible, even if it meant having to forego his original plan.

The returns from exploration are less certain and more remote in time. They don’t move the needle right now. But they also make sure that you can achieve your goals rather than stagnate.

There’s no right strategy to career navigation, but there’s a wrong strategy. It’s the Blackberry strategy.

The Blackberry strategy conceals the bad news until it’s too late. The returns from exploitation are immediate. It’s fun to see BBM’s user base increase. But 2 years later everyone has an iPhone.

If Blackberry were Doug Cutting, they would never have gone to Yahoo and deviated from their original plan.

They’d still be plodding away at the same project. Maybe with another open letter praising the virtues of sticking to your guns.

Thanks for reading. This one was fun to write because this concept of exploration vs exploitation can be seen...everywhere.

If you enjoyed reading it, I’d love it if you subscribed to the newsletter. I only send it out when I have something high quality to share and it’s the best way to stay updated.