Naval Ravikant, founder of AngelList, describes his company’s shipping culture in one of his blog posts.

They like to keep projects to one person. And every person is responsible for shipping something every single week.

It’s quite a polarizing culture. So much so that Naval makes explicit that their environment is wrong for most people. They’re looking for independent people who can ship code and if you don’t fit that type, you should go look elsewhere:

If they can’t ship, release them. Our environment is wrong for them. They should go find someplace where they can thrive. There’s someplace for everyone. Naval Ravikant

I wish more companies would do this. When you’re able to clearly outline your values, you tend to attract individuals that stick.

And sometimes, it’s just as important to list all the reasons why someone wouldn’t enjoy working at a company as it is to list everything good about the company. 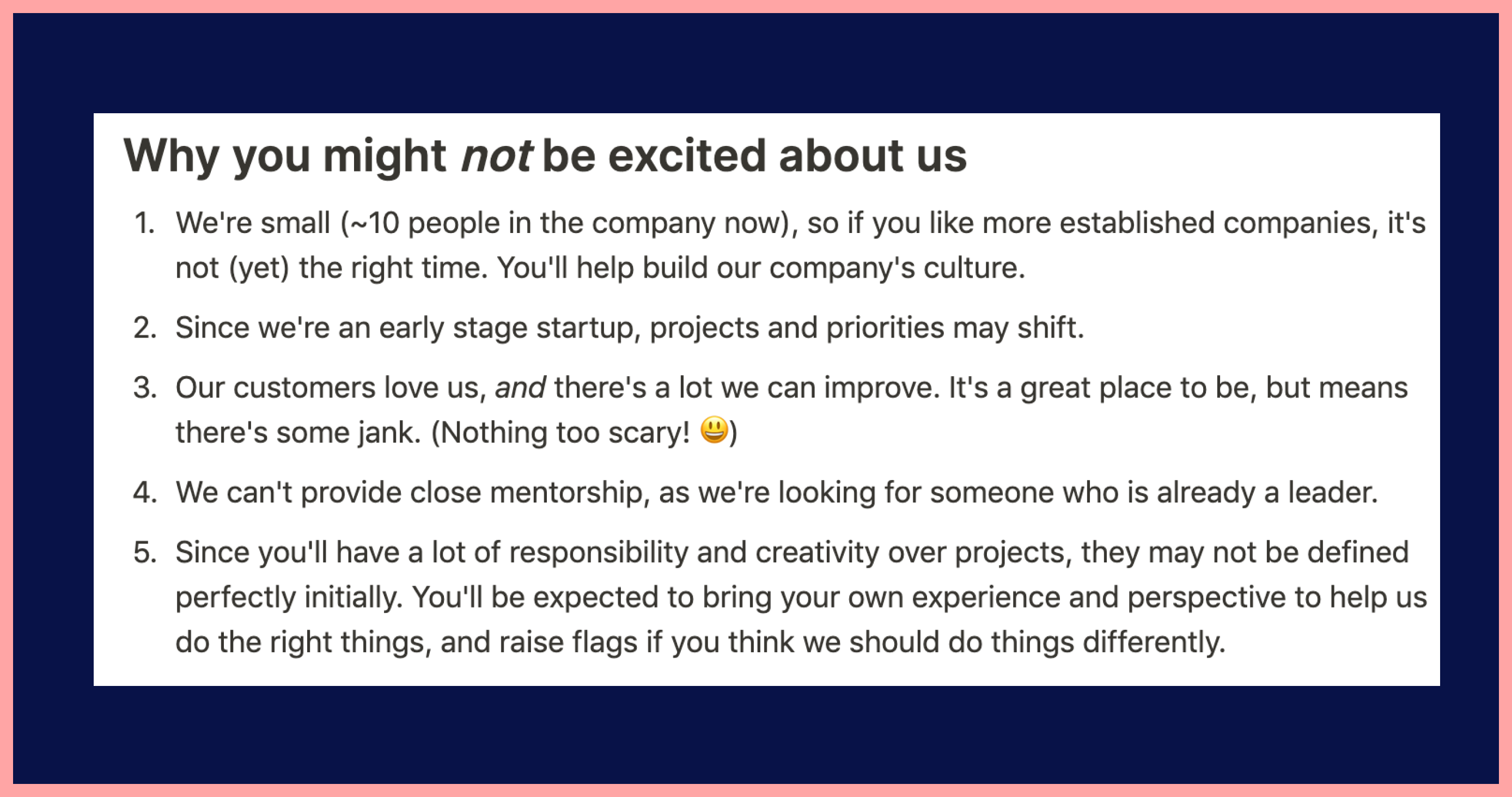 Information like this is gold dust. Think about the countless years people waste working at companies that they’re not suited for.

For instance, the role above would be a bad fit for me. I’m at a stage of my career where mentorship would be helpful and I’d like to execute on projects that are clearly defined in scope.

If a company is not able to explain to me what would make someone a bad candidate for the role, then that would worry me. If you’re not able to eliminate anyone for a role, then the job position itself has likely not been set up for success.

Build a team that ships

I want to talk a bit more about AngelList’s prolific shipping culture.

It reminds me of a ceramics experiment that was done (can be traced back to this book) in which the teacher divided the class into two groups.

One group would be graded solely on the quantity of work they produced, whilst the other solely on its quality.

The grading procedure was simple:

“On the final day of class, the instructor would bring in his bathroom scales and weigh the work of the "quantity" group: fifty pound of pots rated an "A", forty pounds a "B", and so on. Those being graded on "quality", however, needed to produce only one pot - albeit a perfect one - to get an "A".”

Fast forward to grading time. Can you guess what happened?

It turns out that the works of highest quality were all produced by the group being graded for quantity:

“It seems that while the "quantity" group was busily churning out piles of work - and learning from their mistakes - the "quality" group had sat theorizing about perfection, and in the end had little more to show for their efforts than grandiose theories and a pile of dead clay.”

Naval acknowledges that shipping at the velocity they do is not ideal. They make mistakes and many of the features they release are half-baked.

But it is also precisely because they ship so much that they’re able to get it right. Just like the “quantity” group, the engineers at AngelList are constantly iterating and testing out their assumptions.

Rather than always being in paralysis mode, they just build the damn thing. And if it doesn’t work, they try again until it does.

Thanks for reading. I send out a weekly email newsletter containing my best content every Monday - I'd love for you to join.

Benefits Of My Philosophy Degree