Most “experts” teach you how to optimize the information you can put on it.

They mention things like using the active voice. Or listing your major GPA instead of your overall GPA. Or even including certain volunteer activities even though you know you didn’t do much.

What these experts never question is the medium itself. Most resumes are a chore to read.

It’s the distinction between a local maxima and a global maxima - sure, adding certain keywords and phrases might help, but thinking purely within the confines of that sheet of paper is going to limit your ability to stand out.

The digital economy presents new opportunities to brand yourself that most people, frankly, don’t take advantage of.

But Philippe Dubost most definitely did.

In February 2013, Philippe was looking for a product manager job.

Instead of applying with a regular resume, though, he sent in a link to his website formatted as an Amazon site: 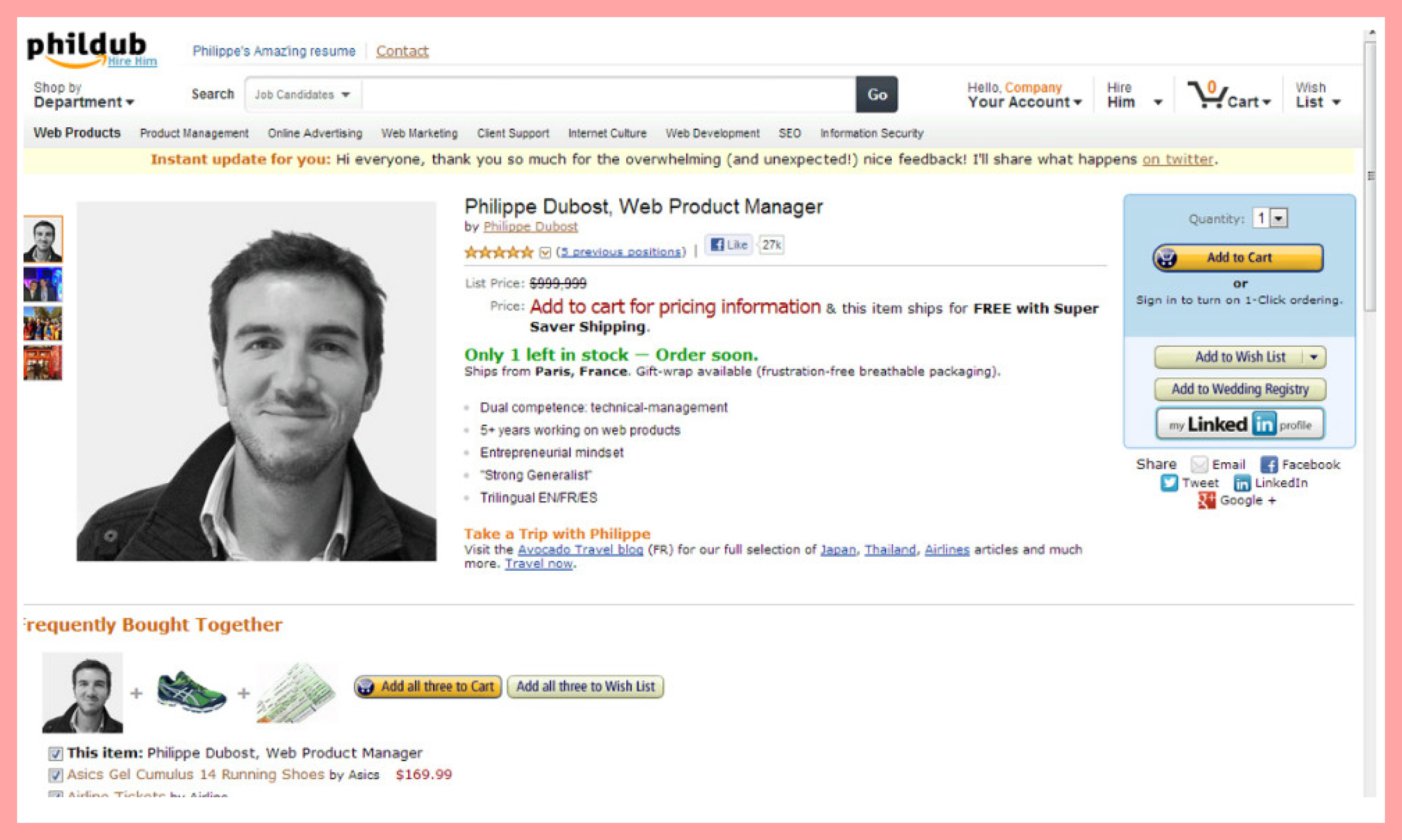 It’s carefully crafted and summarizes his experience in close detail. It also contains much of the usual information that you’d find on a resume

The Medium Is The Message

In 1964, Marshall McLuhan wrote that the nature of the medium is just as important as the content of the message.

For McLuhan, it was the medium itself that shaped and controlled human behavior.

Consider the difference between an email and a handwritten letter. The same exact content will be perceived, digested, and understood in contrasting fashion across both types of medium.

An email contains a subject line and a web font. It’s also instantaneous to send and can be discarded at the click of a button. It can be forwarded to anyone on the internet.

A letter on the other hand is personal. Everyone has their own unique font - namely their handwriting. You can’t send a letter from your bed. You can only discard a letter by physically crumpling it up and tossing it in the trash.

But if you calibrate correctly, the medium you choose becomes remarkably powerful.

In Philippe’s case, he was going for a product manager role and that requires a constant ability to think about the customer and prioritize adequately.

During his hiring process, he was the product and each hiring manager was the customer.

He made the conscious decision to forego the traditional format of a resume in favor of an unconventional medium.

Each has its quirks. A traditional resume layout presents a relatively linear experience. The Amazon Resume layout is bold and original, but also translates nicely to a summary of work experience.

But at the end of the day, his website was packaged in such a way that it communicated everything a product related hiring manager might want to see. In particular, it showed that he was willing to experiment and be creative.

If Phillipe was applying for an accounting role, sending in a resume in the layout of the Amazon website may not have been as effective. 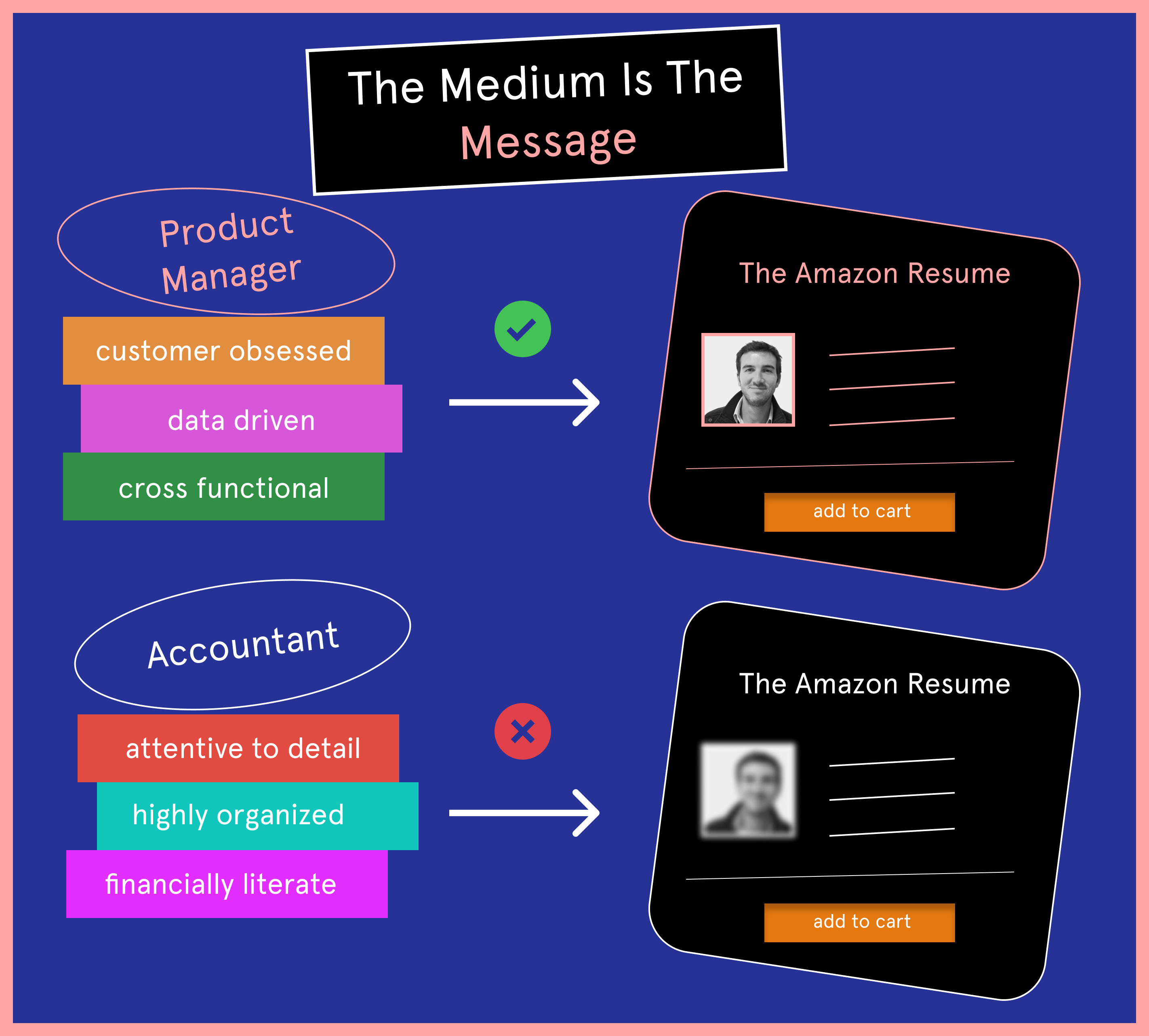 It received over 1 million views in its first 7 days. Mashable referred to it as the best online resume they had ever seen. 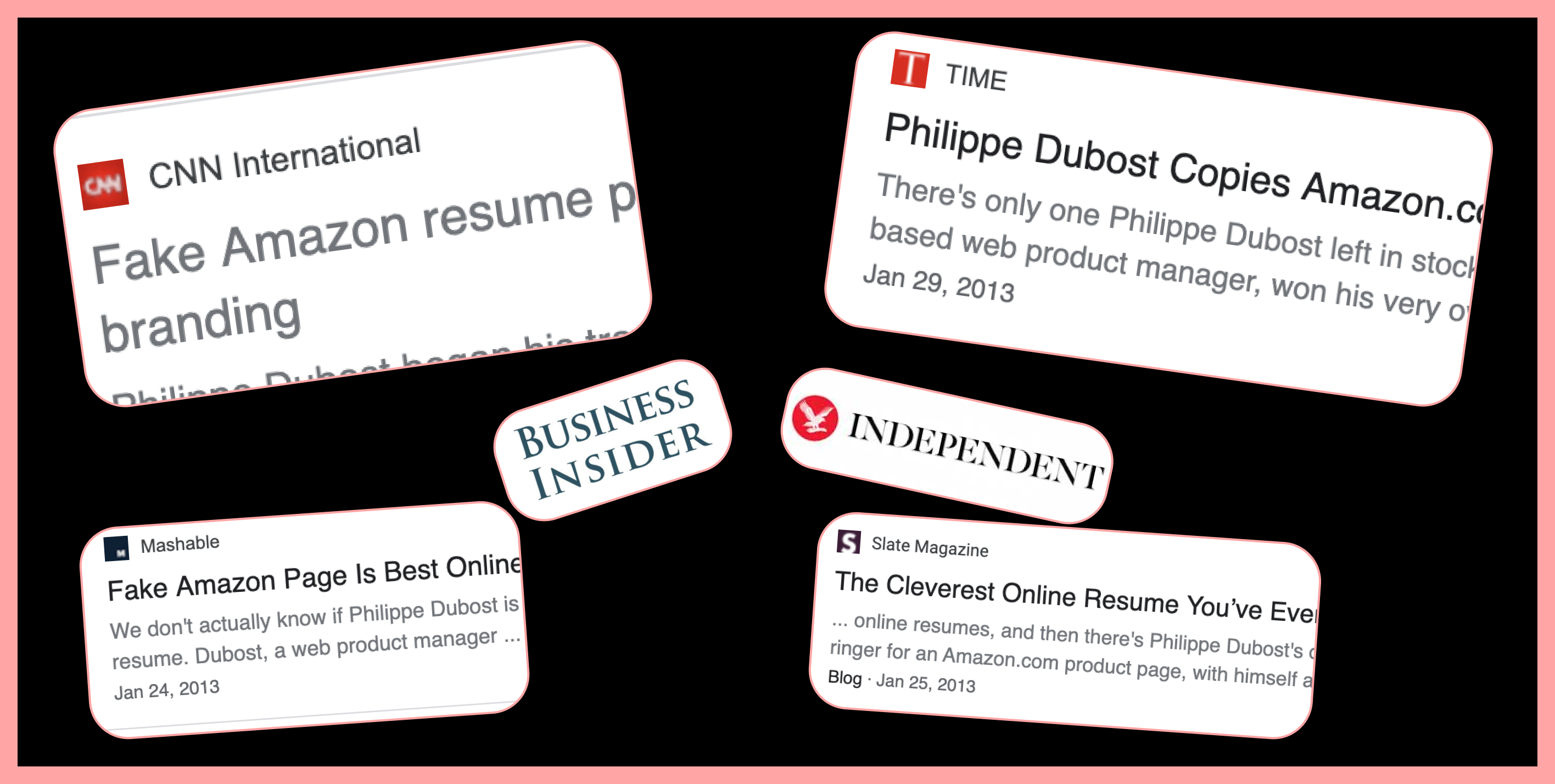 And of course Philippe got hired.

The point isn’t to copy any of these stunts. Choose your own medium and calibrate according to your situation. Take into account your unique advantages.

But most importantly, realize that challenging the default way to do things can produce outlier results.

Redesigning Apple Music After Being Rejected