But it didn’t make me feel very good. In fact, it made me realize that I had been leaving money on the table for almost two years.

I would never have got that raise unless I fought for it. Unless I typed the email and stuck my neck out, demanding what I was worth.

The experience taught me an important lesson:

Retention measures (like pay raises) are reactive, not proactive. If your company feels that you're happy there, they won’t pay you more.

In this article, I’m going to tell you that the data back this up, why this is the case, and what you can do about it.

This imbalance between spending on new hires and existing workers has resulted in historic pay compression, with the gap between the wages of 20- to 24-year-olds (a reliable proxy for new hires) and 25- to 34-year-olds having shrunk to its smallest size in 36 years. (Source)

And this actually tends to impact the tech industry more so than others: 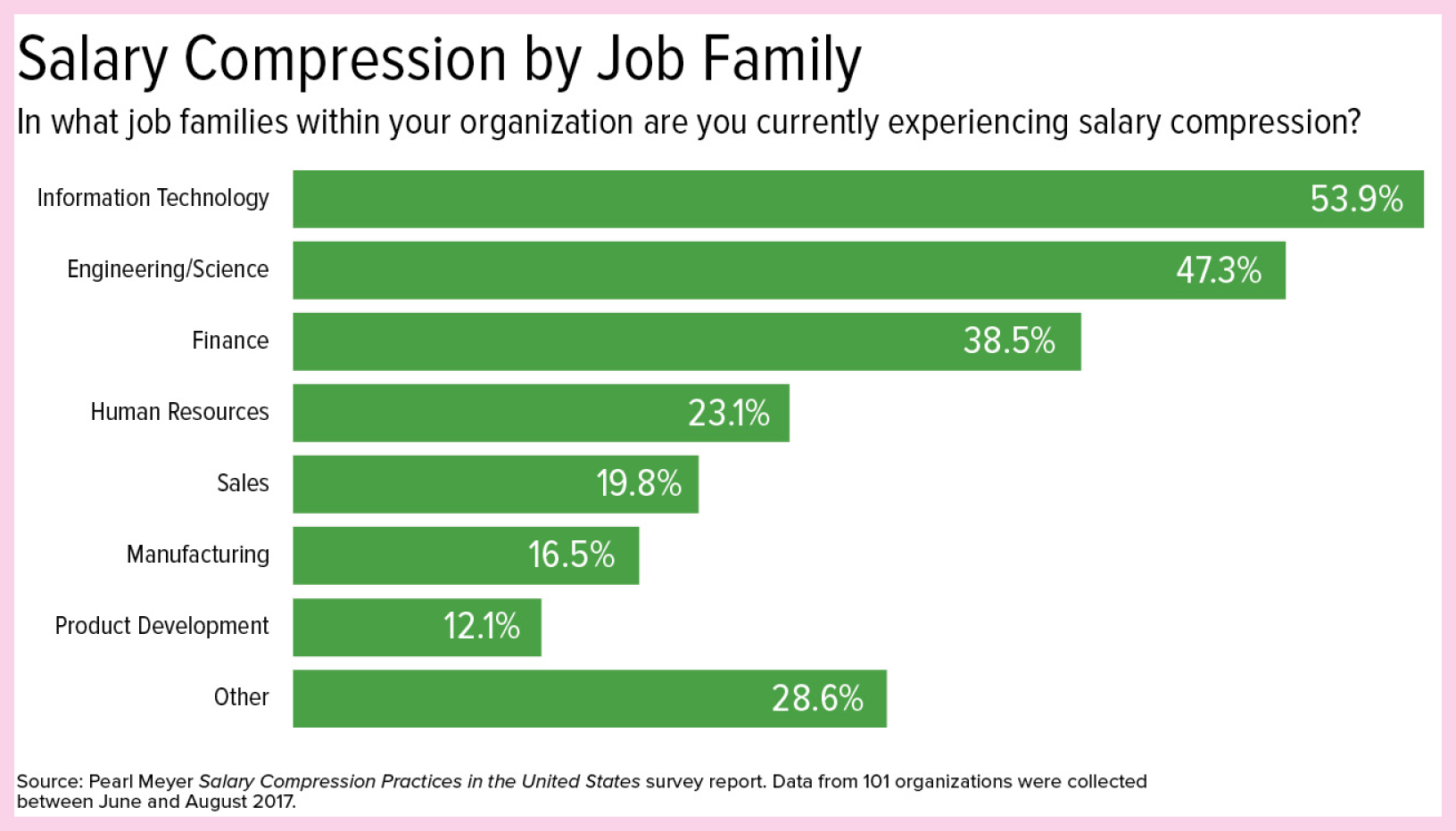 This is pretty surprising considering the cost of replacing someone is high. Companies have to:

So why does this happen?

Solid retention efforts and policies are the type of initiatives that are hard to measure and work over a long period of time, like 5 to 10 years.

And those are often things that can’t be prioritized because of the hypergrowth nature of the tech industry. Investors want to see results now.

Some companies will spend a lot of time and effort to pay the least amount of money they can per role. They take pride in that. It’s much easier to just bring new people in.

Unfortunately, I don’t think it’s the right way to think about the world if you want to be a great company.

One of the most common things that happens, especially at high growth startups, is that your workload increases beyond the tasks of your original role, but your salary doesn’t change.

Defining these internal career growth ladders is actually quite time consuming. And so if it’s not been well defined, then there’s no real precedent for you to get a raise.

In these cases, it’s not even the case that the company doesn’t want to give you a raise, it’s just that they haven’t done the work to establish what the next step looks like.

What this means for you

First, you need to realize that salary is just one element of your total compensation package. There are a lot of factors you can negotiate with that are outside of your base compensation. A quick list:

Second, I encourage you to keep in mind that money isn’t everything. It’s pretty cliché but if you’re learning a ton, I don’t think you need to keep money at the forefront of your mind.

For example, at my last company, the first 12 months were great. I was learning something new everyday and my salary didn’t matter too much to me, because I was in “learning” mode.

The 6 months after that, though, were rough. When I stopped enjoying my work, all the focus became about my salary. And when I got the raise that I wanted, I realized that I was staying for the wrong reasons.

So if you think the raise is going to solve your job satisfaction problems, keep in mind that it probably won’t.

But you deserve to get paid what you’re worth. And if you’re not, it’s time to change that.

Here are three principles you should keep in mind when negotiating a raise:

Principle #1: It’s all about the evidence

Identify your top two accomplishments over the last 6-8 months. Pick ones that have a quantifiable impact. This is your ammunition.

Present this info however you want, but make it as easy as possible for your boss to vouch for you. Don’t make him do any unnecessary work - ideally, it should literally be him having to just forward the evidence you’ve presented (via a deck or a document) to his higher ups and then they discuss it.

Also have a clear salary number in mind. There’s plenty of ways to come up with a number - do research on sites like Levels.fyi, Glassdoor, H1BData, or maybe even reach out to others in the industry.

Principle #2: Keep your emotions out of it

“Anger is our friend. Not a nice friend. Not a gentle friend. But a very, very loyal friend… It will always tell us when we have betrayed ourselves.” - Julia Cameron, The Artist’s Way

Anger can be good. But it’s not in your best interests to be angry when negotiating.

Instead, you want to be firm and solution-oriented. That means that you’re not fighting against your boss or the company - you’re on the same team figuring out how you can do your best work.

For example, if you give a number and they come back with one that you’re unhappy with, instead of getting angry you can simply respond: “That doesn’t work for me. I’m curious how you arrived at that number. Can we walk through it?”

When you keep your emotions out of it, you’ll focus on how the promotion benefits them first and not you. And that’s what they want to hear.

If you have a performance review coming up in 3 months, don’t wait for 2.5 months to bring up your desire for a raise. Start early. Your boss will need time.

1/ Try bringing this up after you’ve successfully completed a great project. Recency bias is real.

2/ If you’re purely trying to maximize your money, the way to do it is to get a competing offer and ask your current company to match it or go above. But you’ve got to be prepared to leave. High risk, high reward.

No one is waking up every day thinking, “Is Shikhar happy in his job? Is he appreciated? Is he fairly compensated?”

I owe it to myself to advocate being paid fairly for my work.

As do you. So go make it happen.

The Most Powerful Principle I Know For Landing A Job