The best way to find work you enjoy is to craft experiments. These experiments can take the form of side projects, volunteer work, freelance work, or pretty much anything really.

Before you start one of these experiments, it’s important to define what you expect to get out of it. For example, if you’re trying to learn a new coding language, then simply shipping a new project would count as a success.

On the other hand, if your aim is to actually learn how to grow a product, then shipping the project itself wouldn’t be a success. You’d also want to invest time in learning how to market the product, reach out to potential users, and potentially even do some sales.

At the same time, it’s also okay to not have a clear expectation of where the experiment may lead. Something that often happens is that you do X but midway you realize you really like focusing on Y instead.

The biggest benefit of crafting an experiment rather than making some type of unknown leap is that we don’t have to compromise our current jobs in doing so. There’s no need for some sort of heroic leap of faith into the unknown. Instead, you’re taking a calculated approach to figure out what else you might like to do.

In this HRB article on staying stuck in the wrong career, Herminia Ibarra points out that the biggest mistake people who are trying to change careers make is that they try to reason their way into something new.

They think that research is the key to everything and that one day they’ll have enough information to act upon, which will set them on the right path.

As one of my favorite authors Derek Sivers likes to say: “If more information was the answer, then we'd all be billionaires with perfect abs.”

There’s really no substitute for trial and error.

Let’s take the typical career changer who follows this “plan and implement” model of career change. They try to introspect deeply and figure themselves out. They audit their past experiences, try to figure out what they liked vs what they didn’t like, and attempt to come up with a bulletproof plan.

The plan and implement model of career change cautions us against making any changes until we’re damn sure of what we’re doing. 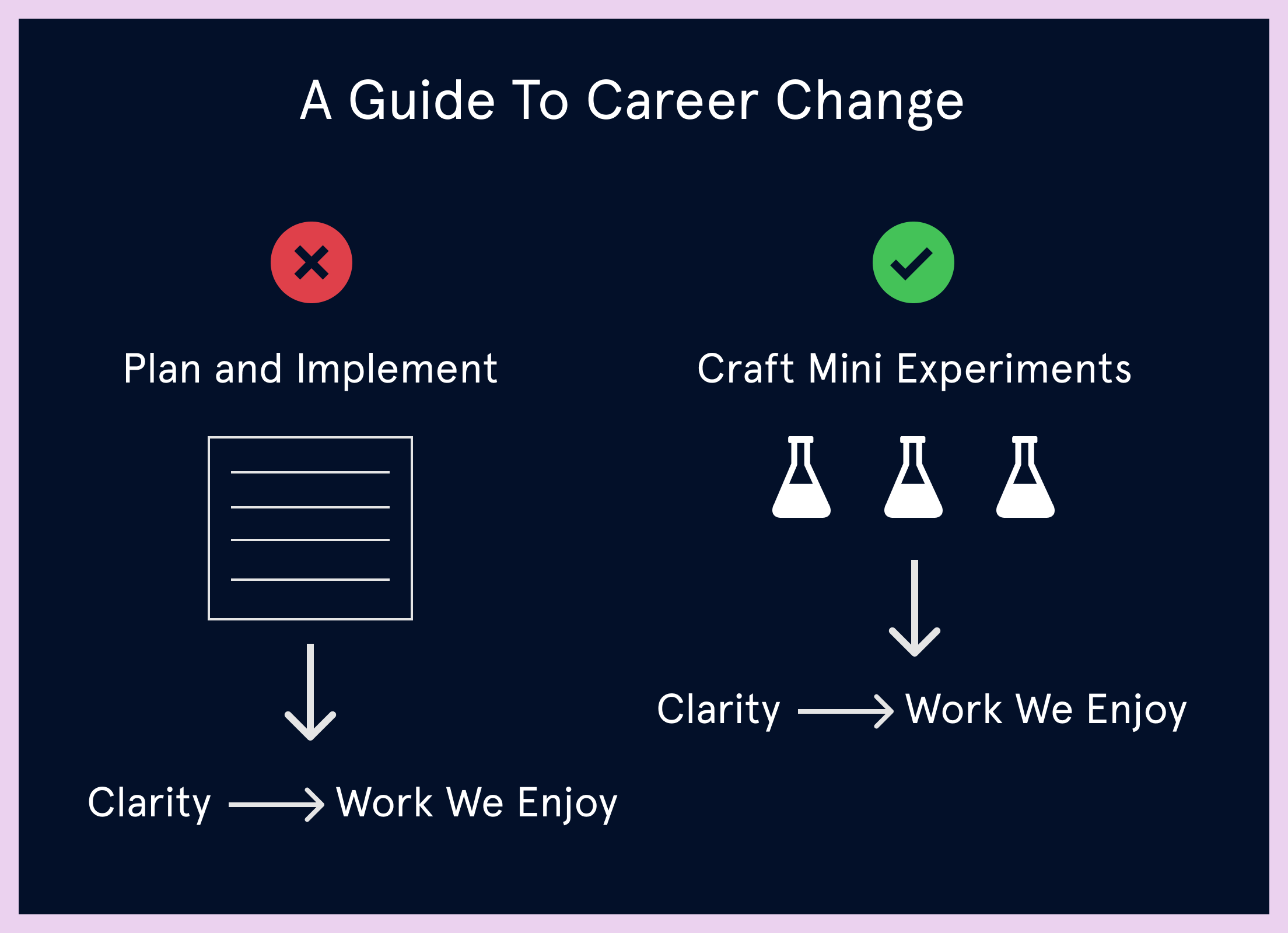 It’s a logical assumption because the better you can understand yourself, the better decisions you’ll make for yourself. And it’s unwise to make big decisions until you know exactly what you want.

That makes sense. But whilst knowing oneself is crucial, it’s usually the result of (and not an input to) career mobility and change.

By running small experiments and making decisions faster, we can eliminate the theoretical guesswork that comes with personal introspection.

Rather than being stuck in analysis paralysis, we instead learn to make decisions faster and get results faster.

The “eureka” moment that’s often glamorized in society as being the cause of great discoveries or insights often comes after much trial and error, rather than acting as a catalyst for drastic change itself.

Herminia Ibarra is the expert on this concept of changing our working identity and crafting experiments to find work we love. More info about this on her HBR article as well as this book she wrote.