I had the chance to speak with Agrata Patel who’s a Product Designer at Atlassian! We spoke about what product design is actually about, the questions designers ask at the beginning of a project, and tons of other stuff.

Can you tell me a bit about your background in design? Is it something that you studied?

During high school, I had no idea product design or UX existed. I was always a good student who didn’t have to study much and I went into the science vertical (in India, they make you pick which stream to go into - commerce, science, arts etc).

But on the side, I really liked making cartoons. And one of my friends at the time was applying for NID, which is the National Institute of Design. So I was like oh cool, you can actually..study design?

At the same time, there was this new program coming up where you can actually go study design at the IIT universities (like in Bombay and Guwahati). It was weird because traditionally you only really studied engineering at these IIT universities.

So, I just decided to wing it and apply. I ended up getting accepted.

I had originally planned to go into pre-med but I realized this way more fun so I just stuck to it and began my journey studying design.

Tell me about the IIT Guwahati design program.

So the course itself is a very general course - you get a Bachelors in Design but there’s not really a focus specifically on UX Design.

We were taught illustration / sketching skills in our first year. Graphic design and visual communication in our second year. Industrial third year.

So as you can see, we weren’t really taught product design per se. It was a mix of a lot of different things which gave us a strong foundational to then explore.

We did have a lot of human centered design courses where we were taught how to user research, empathy driven design etc.

By the third year, I was totally into industrial design. I think this is because they were making tangible products and I like to operate in the intersection of digital and tangible products.

For example, simple things like keyboards and how they’re made, or even Airpods - the design process behind that fascinates me.

Cool! So what do you work on at Atlassian?

So our team is composed of engineers, product folks, designers. And we have to collaborate with other teams like the marketing team and the team that’s actually in charge of the Atlassian website. So there’s a lot of cross-functionality to my role and inter-timezone communication.

How much of your time is spent actually designing (doing say “deep work”) versus being in meetings and collaborating with these folks?

Was that something you expected?

I expected it to be a “waterfall” type process where the design team is working on their stuff and then shipping it off to the engineers. So a type of environment in which there’s not too much discussion.

But it came as a pleasant surprise that I was able to be part of these discussions. The biggest benefit of this is that it eliminates a lot of possible confusion which might foster early on.

Alternatively, though, in fast paced projects our discussions could be viewed as a bit unnecessary. But overall they’re definitely something I enjoy.

Can you give me an example of what collaborating with other team members looks like?

I’ll use an example to describe this - our pricing calculator project. So, at the start of that project, the product manager, content designer, myself, and developers assembled together to decide on how we wanted to build this pricing calculator.

We had a daily sync up for 10-15min and in that we discuss what’s working & what’s not. What’s cool is that Atlassian has a really strong documentation culture (in the Confluence pages) - so we’re able to constantly jot down our notes and refer to them later.

And everyone is involved in the ideation phase. It’s not like the designers sketch stuff and then pass it over to the engineers. Everybody participates in that initial phase - so for example, frontend engineers are able to suggest features that no one else would have thought of.

Okay, and tell me more about what a Product Designer is doing at these early stages.

I’ll take the example of the pricing calculator again. So, the goal of that project was to help our customers compare their services to their cloud prices.

And so one of our first questions was: who is actually going to use this calculator? Which subset of our customers does this new feature of ours concern?

So, for example, it’s not every customer - only key decision makers like those in the finance team or leadership team are actually ever going to use the pricing calculator. 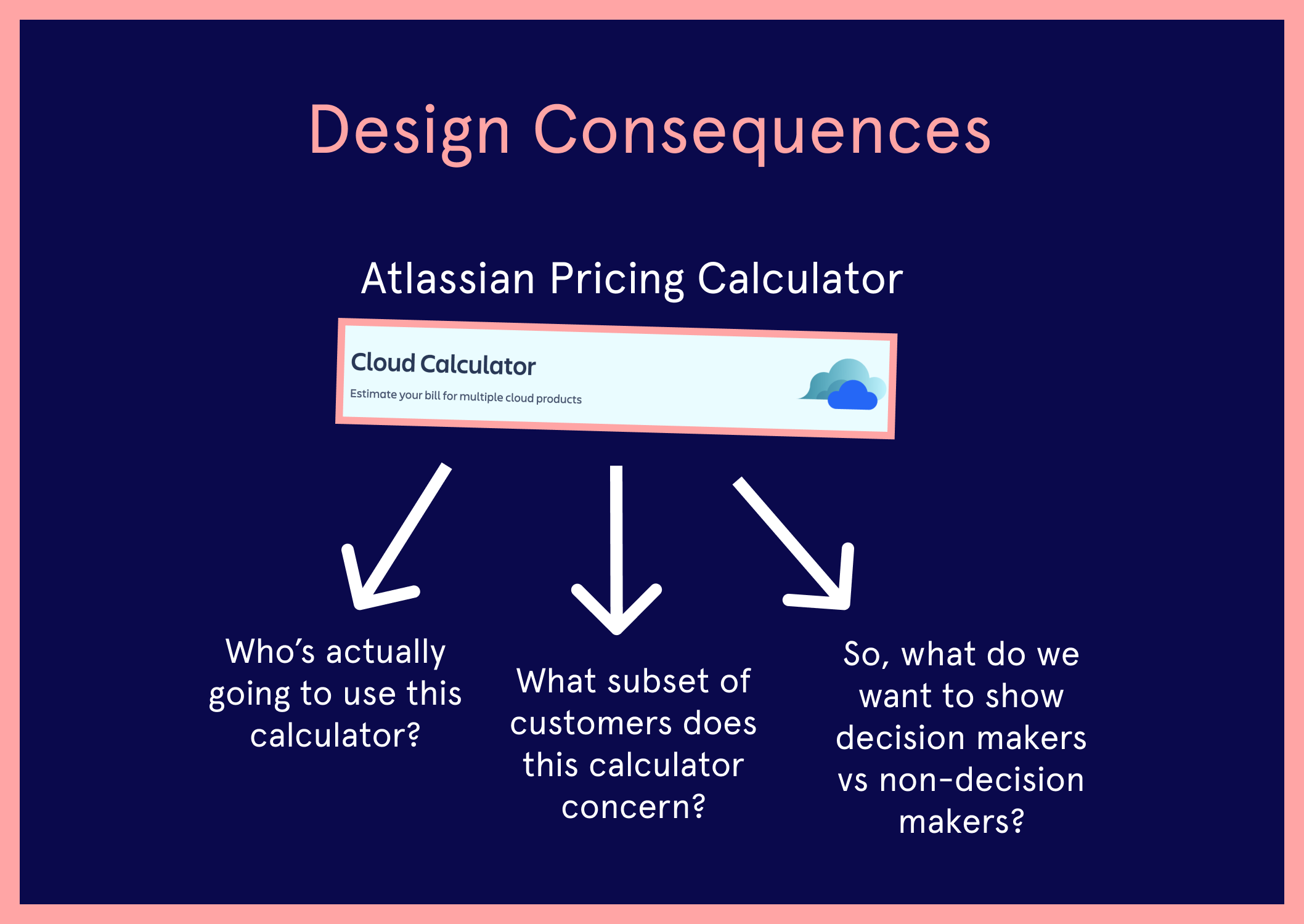 As you move further towards releasing the actual feature, are the designers and product managers still actively involved? Or is it just the engineers?

Yes! Until the project is shipped, the engineers are still asking for our input at each step. They want to make sure that everyone is aware of which way the product is heading towards.

What’s your favorite part of your job?

The ability to reach out to anyone at the company, say, via Slack and then just video call them is really awesome! So just being able to learn about what they do, what projects they’re working on, and chat to them just about anything at work is cool.

Let’s say I need some feedback on something I’ve been working on. In that scenario, I can reach out to someone much more experienced than me and get really good tips on how to improve my work. And there’s some really talented designers at Atlassian, so that’s something I really enjoy.

Another thing I really like is the open nature of the company. A concrete example of this is during my onboarding week - we had two events that were clashing (“ship it” - a mini hackathon the whole company participates in - and one of our events for orientation) and were pretty bummed that we were going to have to miss the company wide hackathon.

So we told our design lead about this (who was giving us our presentation) and the next day we found out that everything had been rescheduled and that we’d be able to participate in the Hackathon. That’s just one example of our leadership really taking our feedback to heart and acting on it.

Sweet! What’s some advice you have for anyone looking to build a career in product design?

The first thing I’d say is that product design isn’t actually much about the visuals. Most of it is about understanding your customers and making decisions that help them. For instance, the push backs we get most often are all related to a feature actually providing business value rather than just looking good or sounding nice. 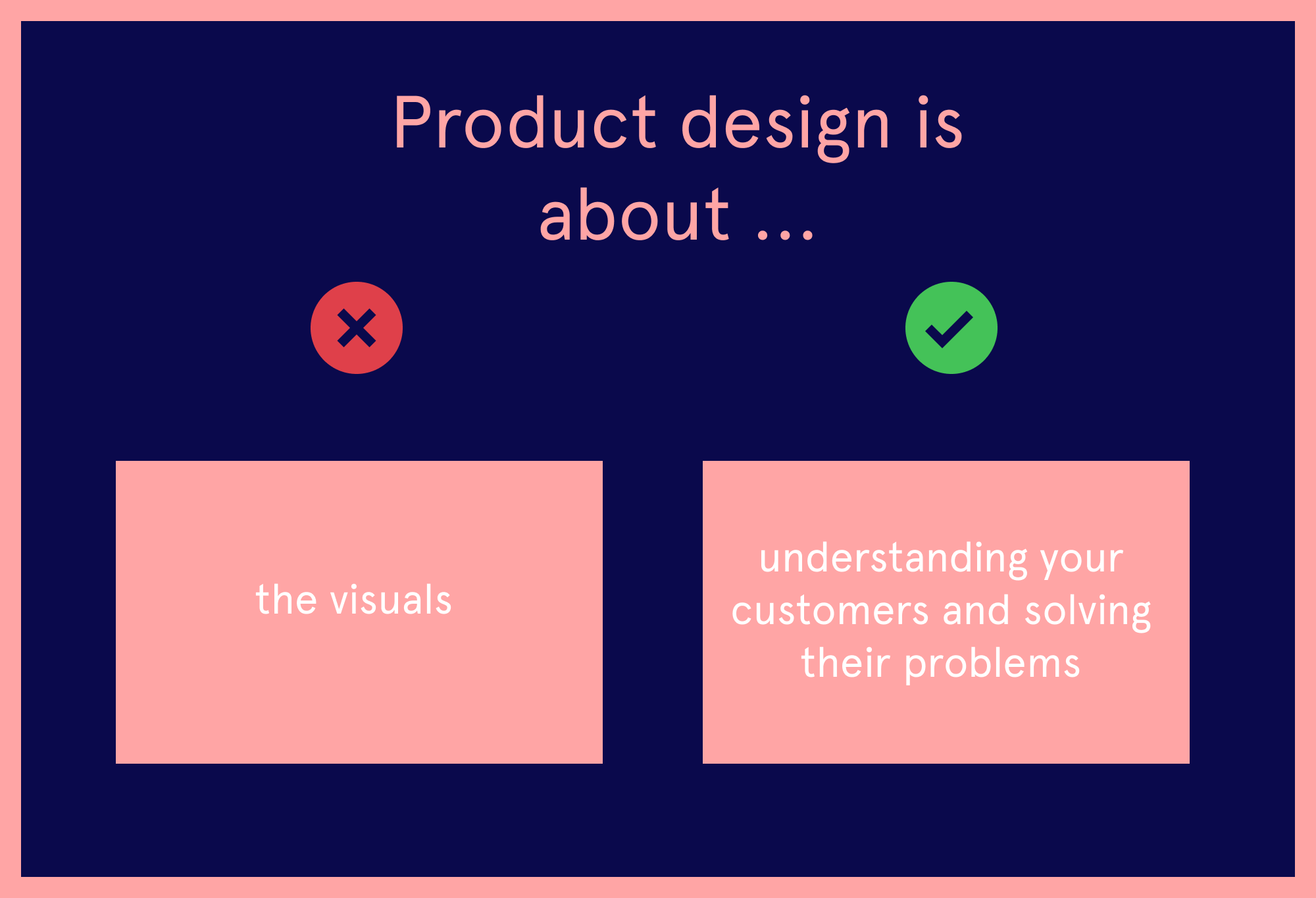